Mistress Emily felt like shitting but she was not at home. She had gone for a picnic with her slave and there was no toilet nearby. She decided to use her slave as her human toilet. She made him eat her shit and drink her piss because she did not want to shit on the grass or on the ground. So her slave was the next best alternative for her. 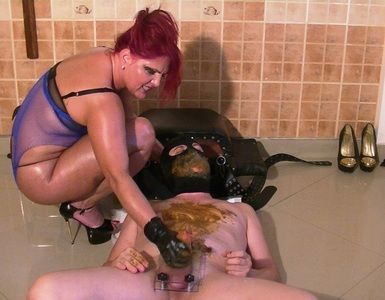 Mistress Anna wanted to show her slave who was boss in that household. Her slave had never been punished and he did not seem to remember he was but a slave. Mistress Anna does not like to punish people all the time so she chose to do it once. She turned her slave into a human toilet and made sure he ate her shit. Not only chew it, but also swallow it.

Goddess Amirha wanted to humiliate her slave as well as have fun at the same time. She called him to where she was and she ordered him to lie down. She facesat on him and forced him to smell her ass. She rubbed her clitoris on his face till she came. But she did not stop at that. She shit on him and humiliated him by making him lick her shit.

Princess Mia and her shit fetish

Princess Mia likes to do crazy things. She enjoys it when she is able to make someone do a crazy thing that he or she would never have done in the first place. Today she decided to make this guy eat her shit. He tried to refuse but she could not hear any of it. She forced him to do it and he had no option but to eat her shit.

Lady Nicole's boyfriend loves how kinky she is and the many crazy things she can do and she likes to do. Today she had something else for him and she was not sure how he would feel about it. She wanted him to eat her shit but she did not ask him. She made him do it. She shit in his mouth and she used her heel to shove it down his throat. He did not like the shitting part but enjoyed being dominated.

This mistress was disgusted by what her husband had done. He had cheated on her and yet she had labored to be faithful to him despite all the interest from better looking and wealthier men than him. She had to punish him and she did. She shit on him and when he shifted his face and missed the shit, she picked it up and shoved it down his throat and smeared his face with it. She also used him as her human ashtray.

Mistress Anna loves to have all kinds of fun. Today she wanted to try scat fetish and she found a loser to humiliate. She made him lie down as she danced for him and turned him on. Little did he know that she was preparing him for humiliation. She put her ass on his face and he thought she wanted a pussy lick. But before he could do anything, she shit on his face.

This guy managed to seduce mistress Emily and get her to fuck him. He had gone through a lot to get to this moment but he had one more hurdle to cross. Being a kinky mistress, Emily loves things in the extreme. She wanted him to eat her shit so that she could see how crazy and adventurous he was. He agreed to eat the shit and made up for it by tearing her pussy apart.

Mistress teaches her slave a lesson

This mistress wanted to show her slave why she is not to be messed with. She called her friend to come and help her discipline her slave. The two mistresses turned the slave into a human toilet. They pooped on him and had him eat the poo. It was degrading and humiliating, but that was the whole point. He had to know that there are consequences to messing with his mistress.