Lady Biac and her shit fetish

Lady Biac does not like to waste her time with losers. If she determines that someone is a loser, she will cut her losses and go away. This guy tried to convince her otherwise. She did not even listen to him. She just took a shit on him and she made him eat it before she left him nursing his wounds and she went way. He never tried to bother her again.

Mistress Jennifer shits on guy for planning to con her

Mistress Jennifer Carter had worked hard for her money but this guy wanted to con her and she would not allow that. She wanted to show him the kind of woman she was so she turned him into her toilet slave and she took a dump on him. The poor guy had to eat her poo and drink her pee. And that is how she never got conned of her hard-earned cash,

Mistress Gaia turns loser into human toilet to get info

Mistress Gaia could tell that something was not right with this loser so she investigated him further. And the more she did the more she knew she was right. She cut to the chase and she turned him into her human toilet. She did not want to be given information piecemeal. She wanted it all at once and after her humiliation, that is what the loser did. He gave it all to her.

When this mistress saw that her boss was adamant that she had to suck his dick which she did not want to, she told him if she did, he would also have to do something for her. He agreed not knowing what it was. She sucked his cock and when she was done, she made him eat her shit and he could not refuse as he had agreed earlier and they had a deal.

Mistress Milana was ready to quit her job as she had had enough from her boss. He was a bully and he was unfair to her. She was stressed and she could not endure any more of his crap. She turned on him today and she made him her scat eater. She made him a toilet slave and he had to eat her poo and drink her pee before she quit.

This mistress does not like to do the same thing over and over again. That is what this loser came to find out. She tortured him for fun and she made sure he learned his lesson. She degraded him using her shit and her boots. She trampled him with the boots before she used the boots to shove the shit on his face into his mouth. Then he licked the shit from the boots. 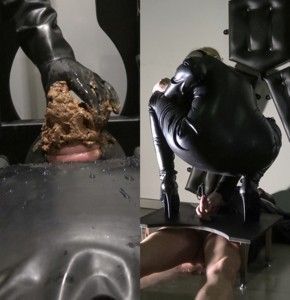 Goddess Parvati and her cruel punishment

Lady Biac feeds guy shit for playing games with her

Lady Biac was fed up with the games this guy was playing with her. She did not want them anymore and she chose to punish the guy so that he never did that again. She chose to shit on him and she made him eat her poo. The poor guy knew that if he did not want such punishment again, all he had to do was to stop playing games so he did.

Mistress Anna was not pleased with what she had seen from this loser. She wanted things to change and she made sure they did by shitting on the loser. She forced him to first of all lick her shoes and her feet. When the loser was done, she got him to eat her shit and drink her pee and it was the worst thing that had ever happened to him.